ZomboCraft is a O.P.O.S. game where survivors must defend against an approaching horde of Zombos before the army comes along to rescue everyone! Players find themselves trapped in a factory and unarmed. Fortunately there are piles of scrap parts around, and players are able to salvage parts to create unique and bizarre weapons of their choosing! Got a Buzzsaw Blade and some Cable? Make a Giant-Bladed Flail! Rubber Glove, Car Battery, and some Nails? Electrified Spike Glove! The possibilities are endless, and so are the Zombos!

As part of a challenge, I will be releasing a new O.P.O.S. at the start of every month, from Feb202 to Feb2021! Each O.P.O.S. will first be available via my [Ko-Fi], then published for free on [itch.io] one month later!

A 'One Page One Shot' is a mini roleplay game played with paper, pens, and dice. All the rules are on one page, and the games usually last from a few minutes to a couple of hours, depending on the host and the players. This game requires:
- A copy of the rules. (Available in Downloads)
- Paper and pen for each player, and the host.
- A single D10 and some D6's.  (Free dice rolling available [Here]!)

This game is intended to be played with a Host, and at least 1 Player (though encourages more), and runs for approximately 1 hour.

Looks awesome! Cant wait to try this thingo out! :D 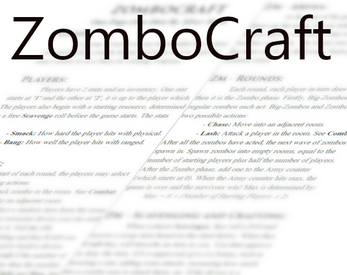