BoneZ - OnePageOneShot (v1.0)
"You are a not a very good skeleton! Escape a dungeon with your skele-pals!"

BoneZ is a standard yet slightly-silly, very-spoopy RPG OPOS with a twist mechanic; you always critically succeed or fail, and because you're a wonky skeleton failure means losing bones and that's not good because you only have so many so if you lose too many you die, but I guess you're a skeleton so you're already dead so let's call it re-un-death2.0 and then you become a ghost because ghosts don't have bones. Anyway, go escape a dungeon and live your best un-life.

A 'One Page One Shot' is a mini roleplay game played with paper, pens, and dice. All the rules are on one page, and the games usually last from a few minutes to a couple of hours, depending on the host and the players. This game requires:
- A copy of the rules and character sheet. (Available in Downloads)
- Some D6 dice.

This game is intended to be played with a host, and approximately 1 to 6 players (however more are possible), and each session should run for approximately 30 to 60 minutes.

Extra Credits!
- MiddleMouse: A good buddy of mine from which I based and modified the crit-pass-fail mechanic off. <3
- Extate: Made the wicked cool font used in the logo. [Avail Here] 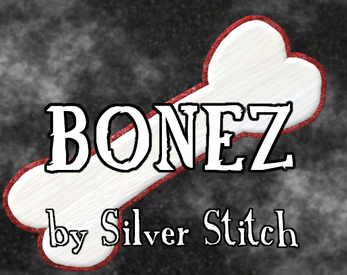